This may be my longest interview yet. I think it really gets to the anguished soul of the artist. . . just kidding. I talk about my target reader and the plot of the book I'm working on right now.

Check out the full interview at The Indie View.
Posted by BradyKoch at 8:23 AM No comments:

Finger on the Pulse of The Rich and Famous - @FlashMobWrites

Challenged myself to write this for FlashMob while on an airplane enjoying free wi-fi. Maybe next time I should include an airplane in the story.

Finger on the Pulse of The Rich and Famous


“Let’s see, today was pretty normal. I had an actress, a singer and a couple of normal people too. Nothing notable”

Sheila wrinkled her nose. It did seem like a normal day. “Who was the actress?”

“I think she was on a couple of Love Boat episodes back in the seventies. Darla something-or-other.”

“Her heart.” Hank yawned. Her husband was always tired when he got home and eager to get in the shower to wash off the smell of his work. Sheila knew if she didn’t get any leads from him now he’d be too tired or disinterested in revisiting his work day to share more than he was allowed to.

“What about the singer?”

Sheila’s pulse quickened. Hank was unplugged from the entertainment world, so if he recognized the person, it had to be a big name “Who?”

“The fella who sang that one song. You know the one.”

She started rifling through the Rolling Stone covers she’d cataloged in her memory.

He cleared his throat, “Da, da, da, dum Family Auto Mart, it’s where the wheelin’ and dealin’ starts.” Hank smiled, pleased with himself. “You know that guy. The one from the commercials.”

Her stomach sank. Of course this would be the notable person that Hank would remember. Living in the middle of Hollywood, surrounded by celebrities and her husband got excited by the used car salesman.

He shook off his jacket and kissed her on the cheek, heading for the bathroom. “If it makes you happier, he at least came in with a pain pill overdose,” Hank offered.

Normally this would have been just the morsel of information she’d want to know, but a local TV commercial spokesperson didn’t have the cache anyone would be interested in gossiping about. Oscar winners, and nationally known celebrities were ideal. Even a celebutante would do if they were notorious enough.  Today she’d have to settle with Darla something-or-other.

Sheila waited until Hank was out of the room before picking up the phone and speed dialing the number she’s conspicuously labeled Dry Cleaner.

“Sheila?” came the voice on the other end of the phone. She never met him in person, only seen his organization’s name on the checks that came in the mail.

“Slow day,” she started. “You remember the actress Darla from the Love Boat?”

“I can look her up.” Sheila could hear his keyboard already clicking on the other end of the phone.

“Well, there’s always tomorrow,” the voice said, before hanging up.

Sheila sighed. She thought her journalism degree would lead to more than being a tabloid informant. She also thought marrying someone who had daily access to celebrities as a technician at the L.A. County Coroner’s office would have generated more leads than this.

Posted by BradyKoch at 10:30 AM No comments:

This was a fun interview with I Heart Reads. I Heart Reads holds a special place in my . . . ahem heart because they were my first ever review when I ventured in to self-publication with Numbers 16:32. IN this interview I get to talk about my favorite and least favorite characters in Guns, Gods & Robots.
Posted by BradyKoch at 11:51 AM No comments:

A fun little prompt this week at Microcosms. I really wanted about 50 more words for this one. Like Flash? Get my Flash collection for FREE!


He’d reviewed the checklist on the way to the Chapel O’ Love, but he swore something was missing. He scanned the crumpled paper as his bride drunkenly stumbled down the aisle.

The locket from the dead waitress in Des Moines. Check.

The wedding bands from the smash and grab in Phoenix. Check.

He supposed his fiancee’s blood-flecked pumps from the massacre in Tulsa were loaners. Check.


Hmmm. That was the one. He scanned their officiant Elvis.  The impersonator’s turquoise ring would have to be good enough. Edgar readied his knife to carve the thing off.
Posted by BradyKoch at 7:13 AM No comments:

My motley little book tour continues. If you want to know what specifically inspired Tyson in Popular Mechanics for Young Widows, the answers are hidden in my responses for IndieSFFantasy.

If you haven't noticed at this point. I've been answering the "what are you currently working on?" question differently in each interview. All answers are different, but they're also accurate. There's about five stories in some state of completion and readiness to share, i'm just spacing them all out to ensure there's not too much of me in the pipeline.
Posted by BradyKoch at 8:25 AM No comments:

Each week after release, I'm sharing notes on each of the stories in my new collection Guns, Gods and Robots along with a song recommendation or two that might share a theme or tone with the story.

I wrote this to celebrate my wife completing her first marathon. As many times as I try to run, I just can't get to the point where I experience the storied runner's high that I've been assured helps make the effort so much more bearable. With 3rd Flight, I tried to understand what might motivate someone to complete a marathon beyond this endorphin kick. What other stakes can be raised to make someone want to put themselves through the ringer for 26.2 miles?

The first draft this was split into 26.2 sections. One for each mile in the race. I was quick to change this up as it chopped up what I wanted to be a flowing story and ultimately felt like a writing stunt, instead of a tool to help propel the narrative.

Soundtrack:
The Futureheads - The Chaos
I always want this story itself to have a pastoral tone, which is quite different than this song. Perhaps this is what the audience watching the race is listening to?
Posted by BradyKoch at 2:17 PM No comments: 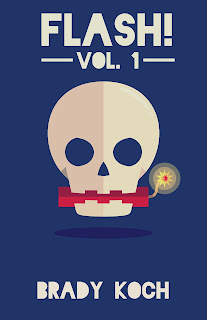 Surprise! I've compiled over a year's worth of my flash fiction writing in a new collection. Think of it as a companion piece to Guns, Gods & Robots. These are the stories I was working between all of the writing and editing for GGR.

It was a lot of fun for me to reread these stories and see common themes emerging in my work. In the future I'd love to have enough of these stories compiled to  make my own page-a-day calendar a'la Gary Larson's The Far Side.


Posted by BradyKoch at 8:36 AM No comments:

Each week after release, I'm sharing notes on each of the stories in my new collection Guns, Gods and Robots along with a song recommendation or two that might share a theme or tone with the story.

I love writing about isolated individuals and populations. In a way that may be the connective tissue between all of the lead characters in these stories. Not intentional, but now that I'm seeing all seven stories in one group, the argument could be made. In my vision of the classic farmer, they fit the bill.

After I wrote most of it I went and added the dog later after the fact. There's no coincidence in the dog's breed and the situation she's responding to. The opportunity to recreate a classic played motif in a horror story was too tempting.

I've further cleaned this version of the story up from my original publication. Mostly in the Hollis section.

Some of the greatest complements I've received are from people who wrote me about the nightmares they had after reading this story. I've had a number of bad dreams too in committing these stories to the page, though mine mainly have to do with ensuring I'm delivering the best version of these stories to the reader.

Soundtrack:
Superdrag - The Art of Dying
Joseph may have a more meat and potatoes approach to mortality and facing death, but deep down, I know he could relate to this song's lyrics.
Posted by BradyKoch at 8:08 AM No comments: