Tools of the Trade #FlashFriday

Another week of Flash! Friday. We had a horse theme and 160 word limit


Tools of the Trade

Ace liked his blackjack the best of all his collections tools. It was heavy enough to pack a wallop on any bankrupt jockey groveling for another loan extension, yet small enough to chuck into a bush if a copper happened to cross his path. Looking at the horse though he’d wished he brought his pliers. The blackjack was doing no good.

After a few more unsuccessful punches he tried opening the race horse’s mouth. The beast clamped down on his fingers after swallowing his beloved blackjack. Ace looked up at the horse almost challenging the thug to continue his assault and remembered the jockey’s last words before blacking out in a gasping pile “you can’t get the money back. I made the horse swallow it.” Ace was going to have to return with a bag of oats and play the waiting game instead of strong-arming the beast. Not just for his boss’s wad of money, but for his blackjack.

Posted by BradyKoch at 7:01 AM No comments:

This was a stressful version of Flash Fiction where you're given a prompt and have 5 minutes to write a little story. I think I was holding my breath for this whole challenge. Definatelyy worth attempting again. The Writer's Network hosts this challenge.

Your character takes shelter in a small cave on a mountain for the night. When he/she wakes in the morning, there’s three feet of snow on the ground. What do they do?


Warren looked out at the snow, pleased. Three feet of snow would have done the trick. Everything was flat and smooth. The side of the mountain only had sparse trees poking from out from the drift. Everything else was flat and smooth with no hint at the what lay beneath.
He sniffed and rolled up his sleeping bag, making sure to place the deconstructed sniper rifle in the center of the mass. He double checked his pockets to make sure his two spent casings were still there. Any evidence of such a high caliber weapon would lead straight back to him once the snow thawed and the dead remains would be discovered.
He hoisted the bag over his shoulder and locked his snow shoes in place. If he was lucky he’d be able to find fresh tracks and get a few more in before hunting season kicked off in two more days. Warren had no clue why the beasts even had a season, they we’re taken off the endangered species list a decade ago and were worthless as meat. Killing Sasquatch should be fair game no matter what the time of year. He even told that to the city commission last time they had a hearing on the matter.
Warren pulled a plug of chaw out of his back pocket and packed it into his gums. He’d packed light on food, and the tobacco would keep him from getting hungry till later in the morning. As soon as he had the pack of leaves in his cheek, he noticed the rank smell. He considered he’d bought the chaw past date, but then he heard the heavy breathing.
Warren looked over his shoulder stood face to chest with an incredibly tall Sasquatch. Like his quarry yesterday, this one was grey. They could have been kin. Warren gulped his tobacco and didn't have time to grimace from the distaste before the monster struck him down with a claw-handed blow. With a grievous roar, the Sasquatch had begin his own hunting season.
Posted by BradyKoch at 2:03 PM No comments: 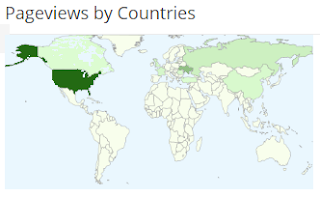 Happened to look at my sites web traffic for the month and saw a massive spike in traffic from Ukraine. Stay safe readers in Ukraine!

Posted by BradyKoch at 1:56 PM No comments:

Here's the other short I wrote for the chess prompt at Flash! Friday. There was a 150 word limit.

The rooks were the easiest to shape, given the medium. Almehide made those first in sets of four. Two he would coat in a patina and glaze in the clay oven at the center of his hovel. Pawns came next, then royalty and knights.

Almehide held onto the bone and used the tip of his carving blade to carve out a path for his small chisel to attempt making a bishop once again. His problem was, once the marrow had been sucked out of the femur, the material would become too delicate create the gentle tapering of the bishops miter. Every piece Almehide cracked and had thrown into the fire. He looked out the window longingly, hoping for another opponent to challenge at this game of royals. This nemesis didn’t need to know the game. Almehide would happily teach him. But after his lesson, he’d play for real stakes. He was hungry to complete his collection.

Posted by BradyKoch at 3:12 PM No comments:

Had some fun writing up two pieces of flash fiction today from a Chess prompt at Flash! Friday. I had a 160 word limit with this one.

Dr. Mudd reminded him that dead ones would be easier, but that’s not what Grünfeld was trying to accomplish. Grünfeld selected the largest of the palmetto bugs from his bowl. He was certain that it had enough brain mass to learn a rook’s simple move set. That’s why he’d scratched the castle onto its elytra with one of the doctor’s old needles.

Grünfeld set the bug on one of the homemade board’s white squares. With his other hand he put a bread crumb near the base of the piece occupying E7. The bugs weren’t as starved as the men in Fort Jefferson, but they would rarely resist the bait. The palmetto bug made his way to the crumb and in doing so knocked over Dr. Mudd’s queen. His nemesis and physician laughed. It was a long way from the self-automated game he dreamed of, but in Grünfeld’s defense this was only his first phase of training the bugs.

Posted by BradyKoch at 8:45 PM No comments:

Had a lot of fun writing this bit of flash fiction over the weekend at The Angry Hourglass. The prompt was an image of a pumpkin and there was a 360 word limit.

There were grey feathers at the base of the pumpkin and it was still warm to Tessa’s touch. The farmer didn't see Mildred around, but she knew this pumpkin had been selected for the year. Tessa fetched the stakes and rope and went about cordoning off the pumpkin for whenever Mildred chose to return.

The farmer had dozens of seasonal workers that she could have delegated this task to every year, but Tessa felt obligated to do this herself. Mildred was a vestige of her ill-conceived attempt to section off part of her pumpkin patch for raising ostriches. With no family of her own to shape her priorities, Tessa had taken to these wild hairs. She’d picked Mildred up as a chick as a trial run more or less. She wanted to see what it took to keep her and feed her as a yearling before committing to a flock.

Somewhere in that first year, she lost the heart to harvest the bird. The only revenue she’d ever made from Mildred was in selling her eggs to curious visitors at the farm stand on the front of her property. It was an impulse purchase from out-of-towners and she never had repeat customers. It was barely worth the money and not worth the maudlin behavior of the bird hunting for her eggs in the weeks after Tessa had removed them.

One morning, weeks before the seasonal help came on to help operate the patch, Tessa found Mildred alone in the field. Sitting. The farmer approached, yet kept a safe distance. The bird pecked and preened at the bed skirt of feathers beneath it and Tessa caught a glimpse of the pumpkin she was incubating.

Tessa sectioned off the pumpkin. In restricting the Mildred’s nest, it inadvertently became the main attraction of her patch. In the crisp air that swept in the autumn year after year, Tessa always considered the bird and its nest. After the gourd rotted away and the ground froze, the bird never hunted for her lost chick. The farmer continued to question what the two of them were trying to harvest.
Posted by BradyKoch at 11:43 AM No comments: