I found an old notebook today that I used to map out the stories from my debut, Guns, Gods & Robots. Amazing how much changed from first to final draft. There was a character called Jamie? 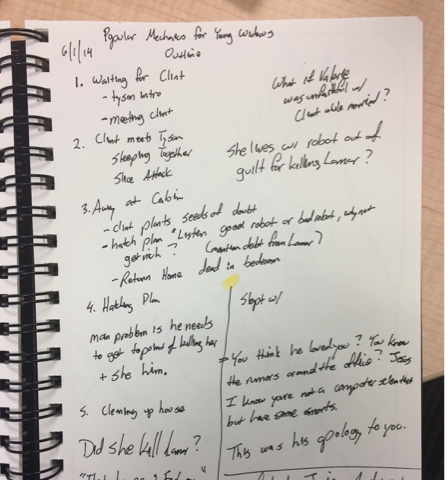 Keeping this week's Microcosms under 300 words was tough. I striped out much of the world building to preserve the human moments.

Island Life
Light from the bonfire in the center of the room danced across the walls as the wedding party led their partners through the ceremonial waltz; kicking off what promised to be a long night of celebration in the great hall.
“I wish the band would play a slower song,” Dorian grumbled, his eyes squinting at the flickering illumination on the chart etched into the stone wall. People were only able to enter the hall for funerals and the rare wedding. In a rare period of good fortune on the island colony, there had been no need to enter the building since he had started dating Francis.
“I found me!” Francis declared from a few feet away. She sounded excited, but her being so close made him nervous. He hadn’t found his own name yet on the island’s official record of genealogy in the five generation after the cataclysm.
“I found you too,” Francis exclaimed.
He darted over to her and traced the line up. Past his mother and father then up two more generations. Francis did the same. Their fingers ended up inches apart but on different names. There were only five families on the island when they were cut off from the world. This chart dictated which islanders could and could not couple.
He looked over at his love. Francis was crying, relieved. He felt the same and hugged her.
“I suppose we should have mapped this out earlier,” she admitted. Francis moved his hand from her shoulder past her breast and rest it on her belly. Dorian felt the small rise there for the first time. His heart swelled. They’d have to notify their parents and the elder. Not that they were confirmed not to be relatives, they would need to carve a new entry into the wall.
Posted by Unknown at 9:31 AM No comments:

A very late entry for Microcosmos this week.

After six months on tour, DJing by night and eating at the best international spots, Kwon-Ace wasn’t looking forward to a meal at his Mom’s restaurant. The Brooklyn locals all liked the cheap little Chinese take-out at Hunan IV, but he’d build his image on authenticity and Mom’s General Tso’s mystery meat were anything but.

He still went though. He had to give his mom some love. But he made sure to dress down in case anyone saw him set food in the grungy dive.

“What the-?” Kwon-Ace stopped dead. The line for Hunan IV was around the block. His heart dropped when he looked up at the new neon sign above the same tired entrance of the storefront. KWON-ACE ‘S CRATE SPACE.

Elbowing his way in the door, he gasped. His treasure trove of vinyl records, laboriously curated, and scraped and scrimped to purchase lined every free square inch of the tiny dining space.

“You like?” Mom’s voice was as small as she was.

“They’re doing no good sitting in your room. “ She squeezed him and he remembered to hug her back.

She approached the order window and lifted up piled high with some sort of rice, fried pork and nondescript glaze coating the entire dish. He recognized she wasn’t serving the food on the classic Styrofoam plates of his youth. “My vinyl!”

She pushed the food away from the records label to see its title. “You aren’t even going to listen to Ali and His Gang Fight Mr. Tooth Decay.”

“Geez. I may pull a sample from there.”

He stood. Torn. He’d have to choose between the two loves of his life.

There was a one Flash Challenge this week! An entry appears!


Stone Quarry
The crone’s face was purple. If Roin had been two more day slow in tracking her, it would have likely been black. She was only newly dead, likely so after realizing the mystical stone in her possession had been the quarry for the prairieland’s most storied treasure hunter. He removed his glove so he could better trace the line of her esophagus, feeling for the hard lump. He felt none. He’d have to remove his treasure from her stomach. He unsheathed his dagger ready to reclaim his birthright from the witch that has stolen it from his father’s coffin.
Posted by Unknown at 9:08 AM No comments: